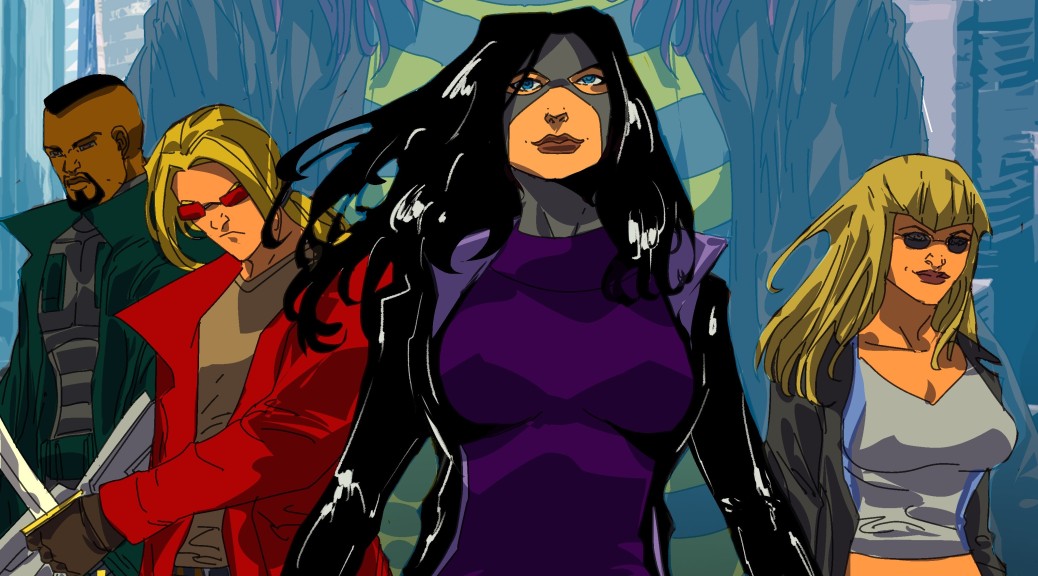 People tell me NOT to do things all the time, and for the most part, I listen. I’ve always been kind of a rules-follower, seeking permission and approval before I feel safe doing, well, anything really. I’m fairly certain this has kept me alive at times, and completely convinced it’s held me back others. And I’m O.K. with that. It’s an integral part of who I am, and who I’ve always been. For better or for worse.

In the months ahead, I, with a tremendous amount of help from a team of creatives I’m incredibly lucky to have at my side, will be launching an indie comic about a woman named Shy. It’s a story about perseverance and recovery; redemption and rebirth, friendship and sisterhood. Oh yeah, and she has super powers.

This brings us to the existential conundrum that recently befell my Facebook browser, causing my head to spin just a little. You see, I have a certain belief that you are well-served in life listing to people who know what the hell they’re talking about. One guy in the indie community that I have a tremendous amount of respect for is Guy Hasson. He’s an incredibly bright and forthright indie-comics producer whose company, New Worlds Comics, was created with the mission to empower comic book creators and readers through its many published titles. New Worlds Comics also produces a copious amount of very helpful blogs and podcasts ranging through a variety of topics connected to the indie comics scene. You can check out all these outstanding resources at the company website here: http://newworldscomics.com/

Well, I recently went to the sight to check out the latest blog, and the title caught my eye. O.K. It actually gave me a mild attack of apoplexy. The Three Reasons Why Indies Should Never Use Superheroes. GAH!!!!

It’s actually a great piece which you can read here: http://newworldscomics.com/?p=1594

However, given that this is exactly what I’m about to do, it did give me…pause. Someone I respect a lot, who knows his stuff, just said I’m about to do something really stupid! Hmmm. Time to reflect.

This is where my very nature plays against my will and desire. Shy has lived in my mind’s eye for over ten years now. Her’s is a story I’ve been longing to tell. One that, by and large, people that have read the script enjoy very much. I have a terrific artist (J.C. Grande) on the project, and other wonderful artists contributing support material that is looking SO good!

Then, I read this piece and all those old instincts kick in. Should I do something else? I’ve got other stories, sure. We could change gears. I could just table the whole thing and save the expense. I’ve done that enough times in the past. Pretty much everything I’ve done in Hollywood, actually. My career as a screenwriter consists mostly of writing a bunch of really good first-30’s, webisodes and shorts for other people, and then watching the project fall apart. Just move on to the next one, I guess.

Well, that little “naysayer” voice in my head spoke pretty loudly when I read the article.  And it lasted all of three seconds.

Here’s the truth. I started producing my own indie comic because I felt it was time to do something that WAS my own. Shy’s IS the story I want to tell. It has been for a long time. It’s a story I believe people will want to read, to see.

Now, I don’t disagree with a single thing that Mr. Hasson says. The reasons he gives are truthful, based on his years of experience in the industry. In particular he speaks of owning your success, a great challenge when dealing with superheroes in comic books.

But there comes a point where my belief in this story and this talented team has to take precedent, or it was never worth doing in the first place. Lots of people have been told not to do things because other people haven’t been successful at it. Good advice. Sound advice! But to me, that’s not a reason NOT to do something, just a reason to make sure you do it as well as you can. One of my great mentors used to say “Joe, if you’re gonna’ [mess] up, [mess] up BIG”. (I’ve edited that quote a little for family audiences!)

The “old” me, the one that sought permission and approval, would shy (no pun intended!) away from this challenge. But, in spite of myself, and despite evidence to the contrary, in this case it was an easy choice – Keep moving forward.  And if we do succeed, them I assure you, my whole team will own every part of it!

Shy will launch in the coming months, her story will be there for all to see. If you take a chance and dive into her tale, I truly hope you enjoy it. And if you made it through this blog, thank you for hanging in there!

If you want to check out some other indies that dared to do some superhero stuff, here are a few good ones:

Vito Delsante and Sean Izaakse’s The Stray: I enjoyed the first issue of this one quite a bit! It’s especially cool if you’re a dog lover! Check it out here. http://www.incogvito.com

Paul Jamison’s Super Hero Network featuring Paragon and Lady Phenom among other cool titles. Paul and his team love the world of superheroes, and it shows. http://www.shncomics.com/

Eric Dean Seaton’s Legend of the Mantamaji: A deep, fully-realized, adventure-filled world in three volumes. A ton of work was put into this title and these guys should be proud. http://legendofthemantamaji.com/